Paris off the beaten track: A walk between two artworks

The 18th arrondissement, Montmartre, home of the Sacre Coeur and Place du Tertre, is not really one of those places that you would call 'off the beaten track'. In places the 18th is absolutely heaving with tourists, souvenir sellers, and con artist (especially the bracelet scam at the bottom of the Sacre Coeur).

Many tourists (and by no means all) make the treck from the Anvers Metro station, up Rue de Steinkerque, through the bracelet scammers, up the Montmartre Funicular, around the Sacre Coeur and across to Place du Tertre. However, here is an option for seeing a little bit of the real 18th (and by no means all of the real 18th) for getting to the top of Montmartre while picking up a few interesting sights on the way.

[side note: when I started preparing this post, I wanted to look at two pieces of art in the 18th. These have become the bookends for this walk, and the other items are bits that I found as I made my way between the two places].


This walk starts at the Abbesses metro station. Make your way out of the metro station and you surface in a little plaza called Place des Abbesses. To get your bearings, there will be a large red church in front of you (Eglise Saint Jean de Montmartre) and behind you is a park, Square Rictus. 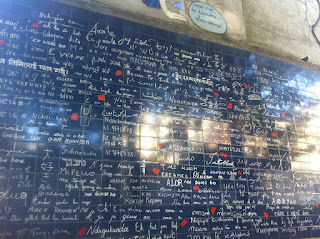 The first stop is in Square Rictus, named after the famous Montmartre Poet Jehan Rictus (1867 - 1933) It is open from 08h00 (9h00 on weekends and holidays) - 18h30. Head into the park and turn left about halfway down and you will come across the piece of art known as "je t'aime" or the "I love you mural". Created in 2000 by artist Frederique Bardon and calligrapher Claire Kito, the mural, made of blue tiles with white writing, displays the words "I love you" in 311 different languages. 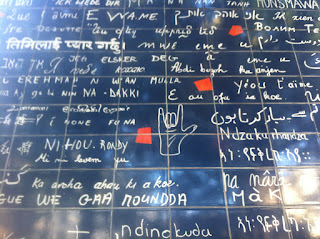 Frederique Bardon's idea was that just as love has a day, Valentines day, with the creation of the wall, it now also has a meeting place, in the 18th arrondissement. There is more information on the wall and its creators at http://www.lesjetaime.com/english. 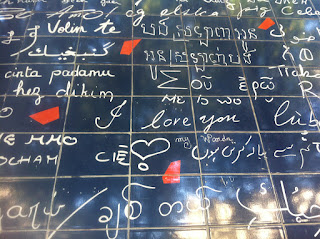 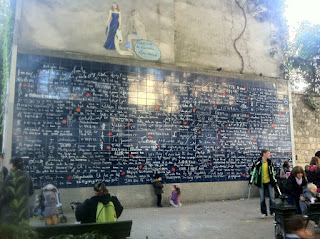 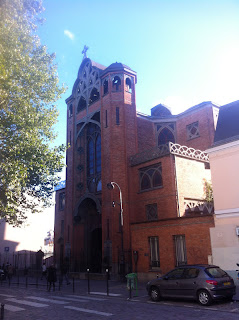 The second stop is the red church, just across the road from Place des Abbesses. The church is the church of Saint Jean de Montmartre. The church makes beautiful use of tiles, both inside and outside, but is actually more famous for being the first church made out of reinforced concrete. At the time of its construction there was immense skepticism about the use of reinforced cement as it went against some of the construction rules of the time and consequently delayed the construction of the church for several years. The church also has a number of Art Nouveau stained glass windows and some great murals and mosaic work (including the alter) inside. 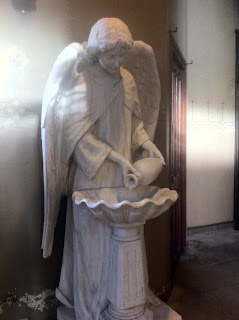 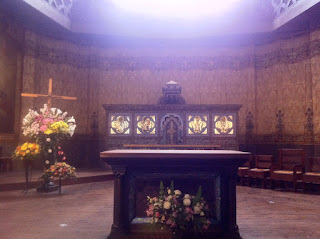 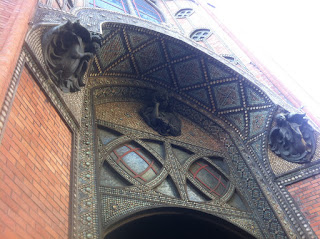 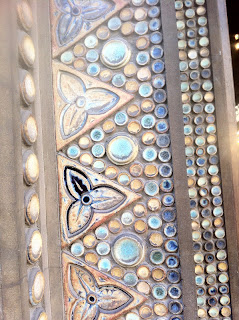 Now its time to start the walk up the Montmartre hill. 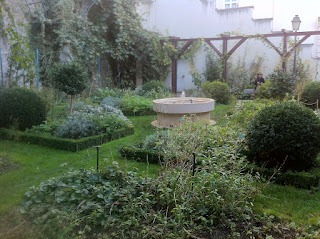 Come out of the church and turn left - cross the road as soon as you can. The first road on your right is Passage de Abbesses. The passage is home to designers and creative types, and has a strange calmness about it, especially after the bustle of Place des Abbesses. At the end of the Passage, on your right, is a little hidden garden, which is in fact the back of Square Rictus, but feels like a completely different place; it has a nice community garden kind of feel to it. 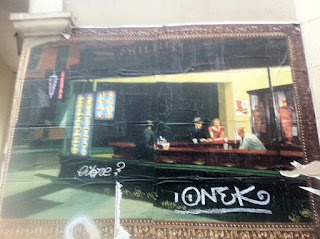 Check out the modern take of Edward Hoppers "Nighthawkes" on one of the walls.

Head up the steps. At the top of the stairs is Rue des 3 Freres. Turn left on Rue des 3 Freres and take the next right at the park/plaza up the short set of stairs. This will put you on Rue Ravignan. 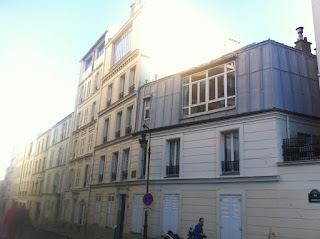 The next stop is where Rue Ravignan meets Rue Gabrielle. A small plaque will show you were Pablo Picasso had his first Parisian workshop which he shared with Max Jacob in 1900. The story goes that Max would work during the day and sleep at night while Picasso would sleep during the day and work at night.. While it is not a tourist attraction, it appears that it is possible to rent the room as a serviced apartment should you wish to follow in the footsteps of the late great master. 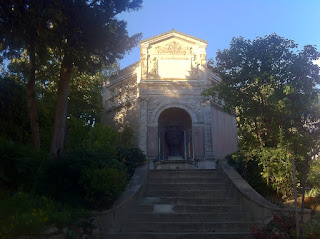 Head up the hill directly behind you (Place Jean-Baptiste Clément) and turn right into Rue Lepic. At the top of Rue Lepic is a peculiar building - octagonal shaped in white marble and surrounded by vines this interesting building which was originally a water tank and tower is now home to the "Montmartre wine brotherhood" founded in 1983. Closely tied with the small wine industry of Montmartre, the building is "A former water fountain which has become a temple to Bacchus". It appears that the facility is available for weddings and special occasions.

Also worth noting is that at 54 Rue Lepic is a house where Vincent van Gogh lived for two years with his brother in 1886. 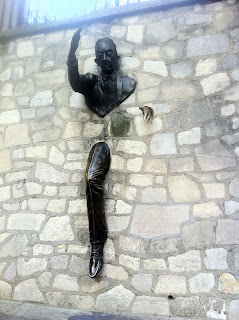 Just below a little park on your left as you reach the end of Rue Norvins is Place Marcel Ayme. Here is the second piece of art, and the last stop on the route. It is the statue called "Passer through Walls" or in French "Le Passe-Muraille". This statue is in memory of the famous Montmartre author Marcel Ayme who lived near by and is inspired by his short story about a man who can pass through walls. 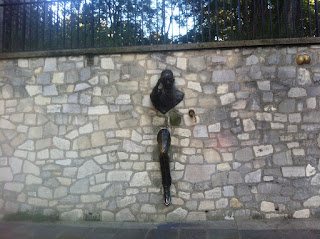 Marcel Ayme is buried in Montmartre cemetery  An interesting touch is the brass bottom that someone has added to the wall to the top right of the statue. Also interesting is the number of guided walking tour groups who walk right by this statue as they explore Montmartre; people don't seem to see it. 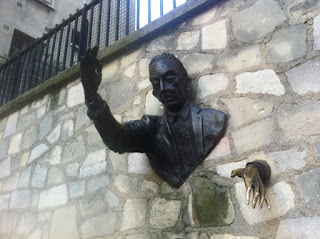 From here it is possible to head back along Rue Norvins and visit Place du Tertre and the Sacre Couer, or head around the corner, back onto Rue Lepic, to the giant windmill "Moulin de la Galette" immortalised by Montmartre-based artists such as Renior and van Gogh.

Keep up to date with upcoming "off the beaten track" locations, and ideas for day trips from Paris on our Facebook page and our Twitter account.
Posted by R and M Harding at 07:33

Email ThisBlogThis!Share to TwitterShare to FacebookShare to Pinterest
Labels: 18th arrondissement, Off the beaten track