Photos from Beyond Paris

The Tour Jeanne d'Arc where Joan of Arc was bought to be threatened with torture in Rouen in 1431. 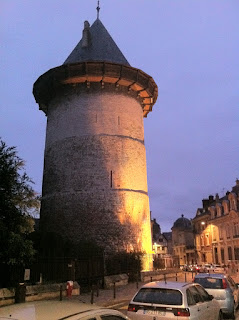 Find out more on Rouen and how to get there on public transport from Paris.

Just added a new town to the "Great Towns" section of the website: Blois.

Blois has been one of our favorite towns that we have visited. It is the perfect small French town, just a little off the beaten track - not too touristy, but with enough to see and do.

We dropped down for a weekend, leaving Paris on the Friday night and returning on the Saturday evening. However, the weather didn't co-operate, and we chose a time when many places were shut. We will be heading back next Spring/Summer to explore more.

See http://www.beyond-paris.com/blois.html for details.
Posted by R and M Harding at 12:47 No comments:

Photos from Beyond Paris 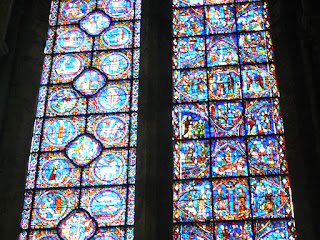 Find out more about the cathedral at Chartres and how to get there.

Beyond Paris specialises in providing first-hand information and advice on day trips from Paris using public transport. Check out the website at www.beyond-paris.com
Posted by R and M Harding at 08:21 No comments:

This weekends off the beaten track in Paris takes in three different locations.

The other week I posted on the work of Gustave Eiffel, noting that one of his major accomplishments was the structural engineering inside the famous Statue of Liberty (which was of course conceived and designed Frederick Bartholdi) in New York. No one, even those not of American heritage, can help but be moved at the poignant symbolism of this major global landmark

Paris' link with the famous statue is a strong one, and long felt. The original statue was designed and constructed in Paris . While I haven't managed to track down exactly where the statue was constructed, there have been a number of photos uncovered of the statue being built in Paris. Where ever it was, it would have been amazing to have seen it being built. The head and the arm holding the flame were displayed at different events in Paris during their construction. 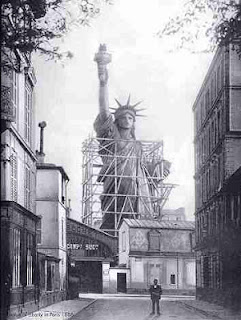 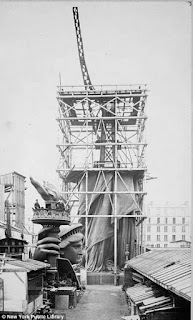 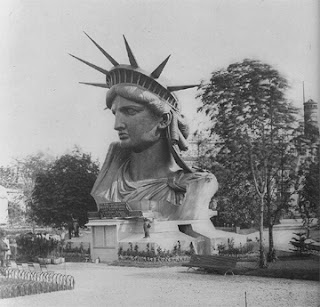 Today there are a number of reminders of the link between France, and especially Paris, and the Statue of Liberty. Today's post visits three of them. 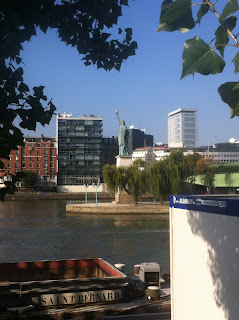 The first stop is on the border of the 16th and 15th arrondissements. If you have taken the RER to Versailles  and been facing backwards, and looked out the window at just the right time, you may have had a "what the...." moment as very quickly a miniature version of the Statue of Liberty standing on an island in the middle of the Seine flashes by. 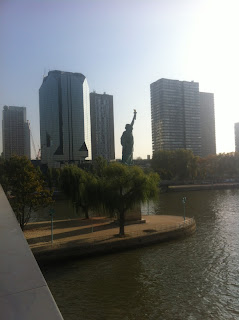 The island is called Ile aux Cygnes (island of swans). The scale model is 11.5m/37ft9in tall and the book in Lady Liberty's hand carries the inscription "IV Julliet 1776 = XIV Julliet 1789" which equates "Bastille Day" with American Independence Day. The statue was given to the people of France by the "American Community of Paris" to commemorate the centenary of the French Revolution. It was inaugurated by French President Carnot on the 14th of July 1889, three years after the inauguration of the New York statue. 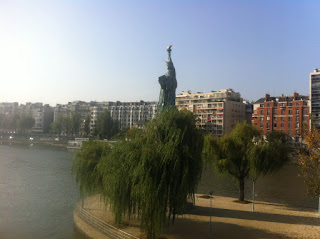 To get to Ile aux Cygnes either take the RER C line to Champ de Mars or the 6 line to Bir Hakeim and walk along the Seine away from the Eiffel Tower. The other option is the 10 line to Javel Andre Citron.


If you want to do a trip across Paris and visit all three sights, from here you can catch the RER C line heading into Paris. Get off at Alma Marceau. Cross the Seine to find the second link between Paris and the New York icon. 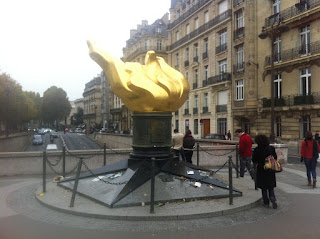 Standing on top of the Pont de l'Alma underpass is a full-sized replica of the Statue of Liberty's flame. Called "The Flame of Liberty" the statue was a gift to the people of Paris by the International Herald Tribune newspaper. It celebrated the 100th anniversary of the publishing of an English-language newspaper in France and was also, at the same time, a token of thanks for the work undertaken by France in the restoration of the the New York Statue of Liberty. 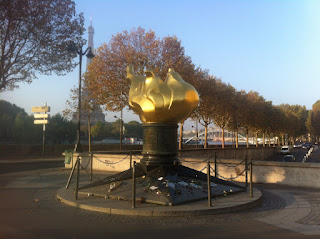 The Flame of Liberty was inaugurated by Jacques Chirac in 1989. In 1997 Diana, Princess of Wales died in a car crash in the Pont de l'Ama tunnel and the Flame monument has since become a memorial to the life and death of Diana with people often leaving flowers, pictures, letters, poems, and, on the anniversary of her death, sometimes candles in her memory.

'
For the next stop, jump back on the RER C line, in the same direction as before (towards Invalides) and change to the RER A line at St-Michel Notre-Dame. Hop off the RER at Luxembourg. Exit the RER station using exit number 1. At the top of the stairs is the Jardin du Luxembourg, one of Paris' major parks and home to the French Senate (there is also a pretty good ice cream stand as well!). Enter the gardens and go straight ahead in to the middle of the garden. As you come to the lake in the the middle of the Garden, go around the lake to the left and when you reach the other side, turn left again along the side of the garden and take the first set of stairs on your right. Go up the stairs and head straight down the tree lined alley. 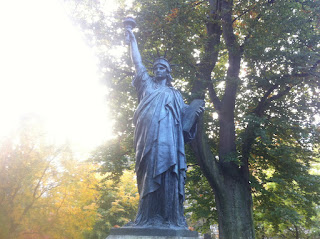 At the end of the alley is what could be called the original Statue of Liberty. The scale model in bronze was apparently part of the preparation works for the larger statue in New York. Bartholdi gave the statue as part of the Universal Exhibition in 1900 and was moved to the Luxembourg Gardens in 1906. 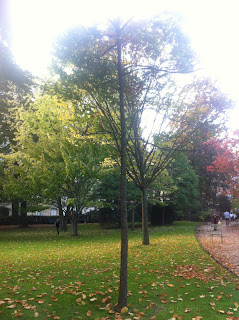 This statue has inscribed on its book "IV Julliet 1889" the date of the inauguration of the larger Parisian statue (on Ile aux Cygnes). This statue is one of many in the park, and if you haven't visited the Luxembourg Gardens, they are a great place to visit on a nice day.

Also of note, right next door to the Statue of Liberty, is an American Oak tree planted to remember those who died in the September 11 2001 attacks.

If you want to complete your tour of Statue of Liberty items in Paris, you should visit the Musee des Arts et Metiers at 60 Rue Reaumur in the 3rd arrondissement  Inside the medieval abbey church of St-Martin-des-Champs is a scale model at 1/16 the size of the original, and two models of the construction of the actual statue. I haven't had a chance to get to this museum yet, but as soon as I do, I will update this post with photos from my visit.


For other activities that are off the beaten track and to get a taste of the real France, explore options for day trips from Paris using public transport on www.beyond-paris.com.

Keep up to date with upcoming "off the beaten track" locations, and ideas for day trips from Paris on our Facebook page and our Twitter account.
Posted by R and M Harding at 10:23 No comments: